BACK TO PARK CITY

We have had a superb days skiing, it snowed practically all night so Park City was full of powder. It has taken a little while to learn how to ski powder properly, today seemed to be the turning point for both of us, although Angus did some spectacular face plants, at one point he dissappeared from view only to emerge covered head to foot in snow. I must say the training we did with Tim Dudgeon has paid off, Tim skied free style moguls for Great Britain in the Nagano winter Olympics which is no mean feat. In my whole life I have only known two Olympians one being Tim and the other a very dear friend of Lindsay's, Lorraine Baker she competed for GB in two Olympics as a 800m runner where she made the finals in one and the semi's in the other an outstanding achievment , if you consider the Worlds population is circa 6.5 billion people and only 10,000 compete in The Games it only serves to prove how exceptional you must be to get there.
We went out early this morning and went all over the mountain, we even took on some of their strongest blacks and survived one was called The Widowmaker I wondered why their were so many wives at the top urging their husbands on. It was busier than previous but the minute you get off the beaten track it soon quitens down.
Tonight we headed off to Deer Valley to watch the world cup aerials for both men and women, these people reach heights in excess of 50 feet, it was the finals and a real spectical there was a live band (plenty of 10s and 24s out) and a party after the event , all in all a good night.
Tomorrow we head off to an area known as the Canyons they have a deal running 1 adult, 1 junior pass $80 to include 2 beers and 2 burgers can't be bad, and with all the powder that is around it is shaping up to be a fun day.
THE AERIALS COURSE 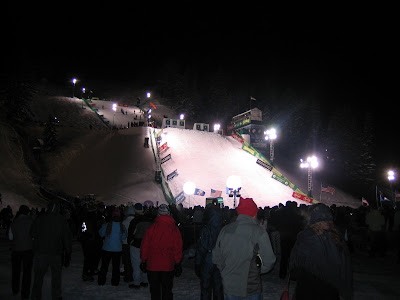 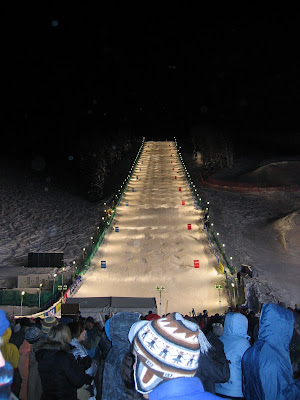