SILVER STAR TO VANCOUVER AND HOME

The flights were totally uneventful thank goodness all on time in fact the London leg was early, our baggage arrived the same time as us which was a relief. I can't say I was thrilled to be back in England it's always nice coming home, but this time because we had such an amazing trip and the fact Lindsay and the girl's had joined us, so we weren't missing them, I did get a feeling of sadness that it was all over.
On arrival at the airport, I had to pick the car up from the repairers, which required me to get a taxi to Slough about 6 miles away, as I walked out of the terminal, taxi's were waiting on the rank I thought great, I told the driver where I wanted to go, "that'll cost you fifty five pounds mate", "what" fifty five quid for a 6 mile journey? "yep your outside the Met area so we can charge what we like", so with that I told him where to stick his cab as I was walking away a chap came up and said "I'll do it for twenty five", "twenty" was my response, "OK twenty" with that I was on my way, my thoughts in the car were the first person I've spoken to in England for five and a half weeks was that cabbie who was prepared to rip me off, what must foreign travellers think when the first thing they are confronted with is jerks like him.
All the motorways were clear so as a result we were home inside two hours, the dog "Dudley" went nuts he seemed so glad to see us.
Well that's it I can only say we have had the most brilliant time, now it seems to have gone quick, but in reality we've done so much, when I look back at that first drive on American soil up to Big Sky that does seem a while ago. I can honestly say we never met anybody in America that was anything other than a delight to talk with, we never heard the whole time we were there anyone swear or behave in a manner that could be deemed obnoxious. As I have mentioned before people often say in England we are becoming Americanised, well maybe that would not be an all bad thing they still have the respect for each other that we once had, how we have gone from the respectful society we were when I was a kid, to what we are today still escapes me.
Not to repeat myself but I'm so glad we've done it, Angus I feel has grown up a little and that he will remember this Adventure for the rest of his life as will I. On that note I would take the opportunity to thank everyone who has taken time out to read our blog and once again to all those that contributed to it, I shall miss writing it up.
Finally Lindsay thanks I love you very much PAK xxxxxx

GOODBYE ALL FROM PK AND THE GOOSE 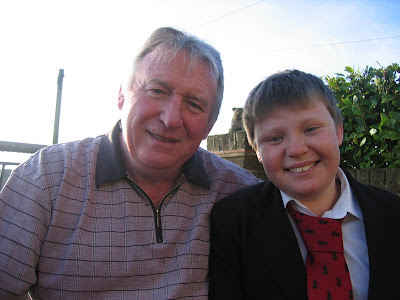