The days seem to be galloping away for everyone, I suppose when your having fun time passes all to quickly, I can always remember being at party or somewhere and saying what's the time? and hearing 12.15, that's earlier than I thought! then what felt like 20 minutes later saying whats the time? 4.25 WHAT!!!! well that's how this holiday is going for us.
For Angus and I it's a bit different we were sitting in the hot tub tonight reflecting on what we have done so far, although Big Sky is a while ago it's still vivid in both our minds I think it will still take a long time before we both fully realise what a fantastic time we have had, and it's still not over.
Angus in ski camp has teamed up with two brothers from Seattle Sam and Dillon they are having a hoot, after skiing this evening he went round their place building a snow fort, the kids parents are really charming Charlie and Jane he's a writer, and she a lawyer yet more people we have met who have invited us to call in when ever we're in Seattle.
The girls had a great time at ski instruction they were in hysterics when we met up with them, they had an instructor they both loved, he was all the things teenage girls adore young, good looking, trendy and funny ( much like myself) so guess what more instruction tomorrow!
I met a chap today over a coffee and bun, he is a New Zealander and ski's for NZ in the nordic cross country his name is Nat Algram maybe another Olympian in the making, and a really nice fellow to boot.
One of the things that's been hard to chronicle in the blog is sheer amount of people we've met, when skiing travelling on the lifts is all part of it, therefore every twenty minutes or so you find yourself sitting with people you've never met before for the 10 minute journey up the mountain, and you would be amazed what your told, in fact by the end of the ride you often dismount the lift with a little more knowledge than you started with, that is one of the things that has drawn me to this sport for so many years.
We ended up at Long John's bar tonight with Steve Todd on keyboards, a good musician who can play practically everything , our friend Euan showed up so a good night was had by all.
THE MONASHEE RANGE

REFLECTING IN THE HOT TUB 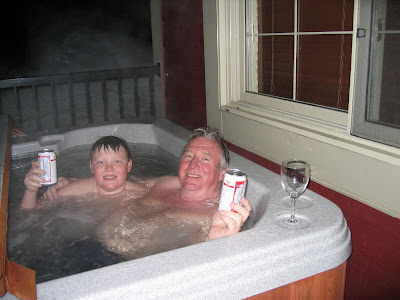 Who is this Uncle Buck? And why haven't the police (sorry, Sheriff) sectioned him yet?? Guess they think being married to this Auntie Julie Woman is punishment enough!

The trip looks brilliant guys, really ace. Not sure I like the blog though - it's making me very green indeed! Sonw, good looking ski instructors, parties and beer in hot tubs (maybe without PK and Gus) sounds like my idea of a fun time...

Love, your most coolest of relations, Sarah x

Hi to you all from Grandad, looking after Dudley and he is going on lots of walks.