Tomorrow we're off to Siver Star it's about a two and a half hour drive across the Okanagan which should be an interesting run. The Okanagan area is where most of the British Columbia wine is grown as well as apples, cherries and other fruits, it's quite an odd place the valley has a number of lakes primarily, Lake Okanagan it's also designated a desert area, yet when you go up a mountain like Silver Star there is just heaps of snow.
This coming week or this "upcoming" week is Presidents week it's the American equivalent of a bank holiday and as a result Sun Peaks is filling up with Americans, the amazing thing is they are nothing like the people we met in America, maybe like the Brits abroad, they are not representative of their nation. The strength of the Canadian dollar however has reduced their numbers, which is obviously not good for business, and judging by the general credit squeeze here in North America I don't know how we in Britain can avoid a major slow down.
Russ and Sue are doing well, Russ skied two blue runs today that is the european equivalent to red runs, I have always thought the word blue here seems to cover a much too wider range of runs, they only have three designations Green, Blue,Black where in Europe we have Green, Blue, Red and Black I think European system is better as it " fine tunes " the runs as opposed to a more broad brush description, the one thing I have noticed having been skiing so many different mountains over the past month is the variation in difficulty that each resort perceives it's self to be. For example most blues in Jackson Hole would be blacks in most other places, whereas in Big Sky most greens would be light blues almost any where else.
Sun Peaks for me has been a kind mellow mountain it has'nt got any unexpected suprises if you ski a cruiser it's a cruiser, likewise ski tough it is tough. It's snow is not dis-similar to Whistler albeit a bit lighter, but the powder cannot be compared to Utah.
I am looking forward to up rooting again tomorrow Angus and I are now experts five minutes and we're packed, mainly because we never unpack that's the secret!!
We are all looking forward too Siver Star Long John's bar here we come.
LAST RUN AT SUN PEAKS 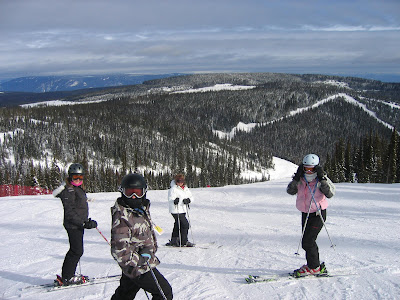 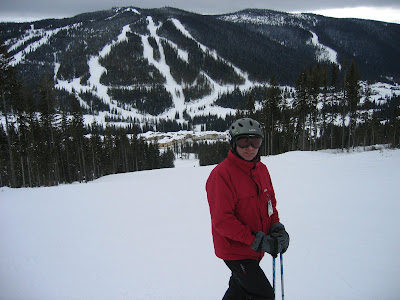 Howdy cowpokes (big an small !)
Hope you’aal are havin a rootin tootin time
Hey sis, tell me yer didn’t go all that way jest to check out the shops an the hot tubs (an the bars !)Lets see yer on the slopes a hootin an a hollerin “remember the alamoooo”
Angus, always keep a fried sausage in yer pocket in case yer run into a grizzly bear, yer can hit him on the head with it a skedaddle.
Hey pistol pete, theres a job goin on “wish you was here”, I’ll apply for you in your absence.
An listen up you cowgirls, look after them grown ups an keep em sober or they’ll embarrass you fer sure, sure as eggs is eggs. Keep em on a tight reign, tuck em up in bed and then hit the town till sun up.
It seems yer all getting spoilt with all that fancy grub an powdery snow, people awaitin on yer a hand ‘n foot. Don’t youall fret, We’ll just a hold the fort back here whilst yer havin yer hoedown.
An listen you kids,
Keep yer eyes peeled for them pesky redskins round a bouts
Easy to spot, usually on knees holdin bottle of firewater in brown paper bag
Silver star is where a warparty of comanchees tried to jump me an my mule just a goin about our business up the mountain thereabouts.
They was purty nifty them injuns catchin us unawares, as they tend to, but we managed to tie some planks o’ wood to our feet an slide right outa there afore they could skin us alive. Some say we was possibly onto sumpin, said theyd never seen anybody go down hill so fast. I weren’t quite sure how to take that, but the mule seemed happy enuff., couldn’t get him to take the damn planks off after that.
Anyhows, remember me to long john iffn yer goin in his bar fer a finger or two of redeye.
I remember him when he wuz only little john, livin in sherwood forest with a band of outlaws. I guess hes come up in the world since then.
An a word of advice for you littler varmints. Don’t go a worry’n bout no different colours when yer swooping down them runs, jest come down backwards, yerl see it don’t make no difference anyhows.
Ps. I forgot ter mention it was me an the mule that invented that there engineers breakfast. We was a tunnelling through them rocky mountains fer the Canadian pacific railroad back in the 80’s (dynamite comes in pretty handy fer this kinda work by the way). When we finally broke through to the okanagan valley the first thing we saw was tescos. We soon rustled up some bacon, eggs, sausage ‘n beans in the car park fer the boys an the locals had never seen grub like it, them stickin ter boiled beaver & musk rat droppins mostly. Anyways, bein as I was the first engineer theyed seen in them there parts, and theyed never seen anybody cook with dynamite before neither they was perty impressed and the name kinda stuck. Iffn yer spot a hole in the car park yerl no yer in the right neighberhood.
Adios amigos